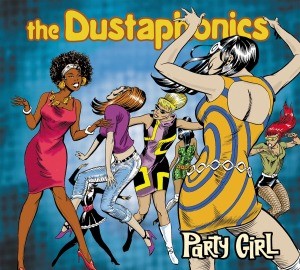 Originally started down a Hackney back alley as the backing band for B-movie goddess and Faster Pussycat Kill Kill star Tura Satana's latest film, The Dustaphonics have now cemented themselves as fixtures on London's live music scene.

And with members of Thee Headcoats and The Wildebeests and fronted by musician, DJ and all-round garage rocker extraordinaire (as well as being the "most influential French person in London"!) Yvan Serrano-Fontova, you already know that with The Dustaphonics, rock'n'roll mayhem is guaranteed.

Top it off with the voice of Jamaican-English-San Franciscan soulstress Kay Elizabeth and "Party Girl" really starts to live up to its name.

Following on from the single "Burlesque Queen" (which featured lyrics penned by Satana herself before her untimely death), their first album takes the classic themes of love, partying and semi-naked women, adds a good dash of voodoo then mixes it up with a lung full of London smog.

With a mix of excellent originals and choice covers from the likes of The Sonics this album is the perfect soundtrack to any trip to Haiti or New Orleans, preferably in the company of two leather clad go-go dancers.

This an album that combines all your favorite styles, without ever sounding forced; that introduces elements of surf and r'n'b to ska and jazz as if they were long lost brothers.

From "Showman Twang Tiki Gods", which fairly reeks of Hawaiian Tropic, to the haunting cover of Howling Wolf's "You Gonna Wreck My Life", every influence gets thrown in the melting pot to create a vibrant garage gumbo.