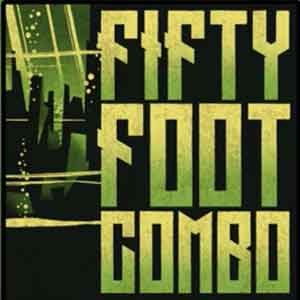 The wait is over, it’s here! Twelve years after “Ghent-BXL” the mighty Fifty Foot Combo unleash the next full-length chapter in the history of Monstrophonic marvelousness. Still marching to the beat of their own drums, embracing voodoo percussion, grinding Hammond bliss, Big Muff bass, guitar fuzzadelica and a haunting theremin. Clever as a bag of snakes, the Combo flew in former Dirtbombs bass ace Jim Diamond from Detroit. This legendary music producer - who worked with the likes of The Sonics and The White Stripes – came to Belgium to mix the analogue recordings on the spot. It could be Diamond’s magic touch, but no other FFC studio album comes this close to the raw jaw-dropping live sound the sextet always fire off. Fifty Foot Combo deliver originals like only they can, surfing the soul, trashing the garage. Their already wide-ranging rock & roll amalgam has expanded even more, ranging from big beat exotica to a Wall Of Sound bonanza, at times well equipped for some Tim Burton directed spaghetti western Hammer flick. You get the picture. While most of the songs are ‘instrumonumental’ in style (including a fierce rendition of Link Wray’s “Law Of The Jungle”) the Combo also deal out vocal stabs. Take their proclamation “I’m always right when I cross the line” to heart. With such a scorching new album under their belt, no one can argue with that. Damn right.