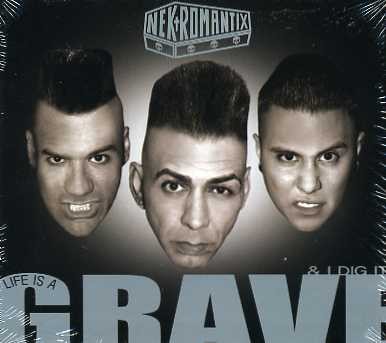 Beschreibung Produkt-Videos
Beschreibung
Nekromantix is one of the premier psychobilly bands in the worlda live juggernaut whose shows... mehr
Menü schließen
Produktinformationen "NEKROMANTIX - Life Is A Grave & I Dig It CD"

Nekromantix is one of the premier psychobilly bands in the worlda live juggernaut whose shows and albums are a guaranteed good time. None of that changes on Life Is A Grave& I Dig It!!!, but theyre just not the same band. Antithetic to their horror aesthetic, theyve changed into somethingbetter. For nearly a decade, Nekromantix wrecked across the U.S., U.K., Europe and Japan, emerging from the underground dirtnap to become one of the worlds most successfullets face itgenre bands. But rather than dwell in relative obscurity, Nekromantix helped bring psychobilly to the forefront of rock n roll. Soyeah. Wouldnt you say its time for a change? After the release of Return of the Loving Dead, Nekroman decided the band had accomplished as much as they could from Denmark. He loaded up the hearse and moved to Beverlyer, the U.S. There, he enlisted new guitarist Tröy Deströy (The Rezurex) and drummer Andy DeMize (The Rockets). With Live Is A Grave& I Dig It!!!, theyve made an album that is pure Nekromantix while expanding on what, exactly, that means. TRACKS: Life Is a Grave & I Dig it! * 01 NekroHigh * 02 Horny In a Hearse * 03 Life Is a Grave & I Dig it! * 04 My Girl * 05 Rot In Hell! * 06 Voodoo Shop Hog * 07 Cave Canem * 08 Flowers Are Slow * 09 B.E.A.S.T. * 10 Anaheim After Dark * 11 Fantazma * 12 Panic at the Morgue * 13 Out Comes the Batz