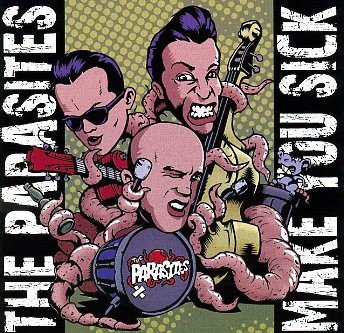 Members of The Photon Torpedoes, Beantown Boozehounds, and Calamity come together under the guise of The Parasites to give us eleven tracks of good wholesome family fun. It kicks off with a very Godless Wicked Creeps tinged vibe in Night Of The Bloody Ape. Good stuff. From then on in though that comparison (influence perhaps) isn't so obvious but does reappear here and there. Big twangy voodoobilly beats abound with only one track reaching the dizzy heights of 3 minutes. Short sharp aural onslaughts with sore throat vocals and reverb drenched guitar all backed up by a stomping rhythm section. Self released and self financed, the boys can be proud of this, their debut offering to the denizens of Psycho-Ville. They have a very distinctive late 1980s/early 1990s psychobilly feel to their song writing style. Although hailing from Boston it's obvious their influences lie in the European psychobilly sound as opposed to the sound emanating from their US compatriots. The album is available on the band's eBay page so pick one up before it's gone and you end up regretting you didn't put your hand in your virtual pocket.