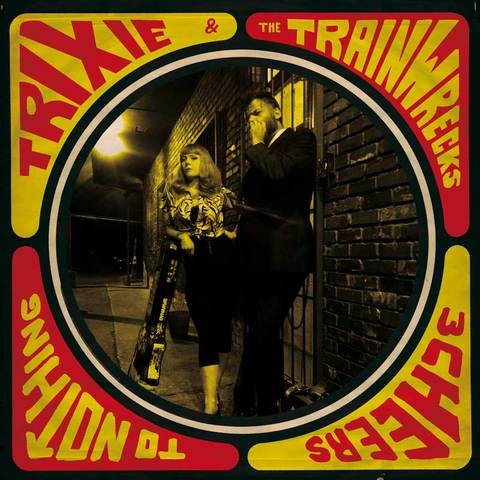 Wild child, Trixie Trainwreck aka Trinity Sarratt was born in San Francisco and moved to Berlin on a whim when she was 18. She started her musical endeavors in the underground trains back in 1999 and went on to make a name for herself working in and promoting shows in almost every bar in town as well as touring the EU and the USA with a handful of bands (Kamikaze Queens, Cry Babies, Runaway Brides) and most recently with her one woman show as Trixie Trainwreck No Man Band. She’s probably the hardest working girl in showbiz…and a mother, too!!

THE RECORINGS:
When Dylan Walshe introduced Trixie Trainwreck to Charlie Hangdog on the premise of playing around London, no one could have predicted what would happen next. After a handful of shows and what may have been a one- off session with Bruce Brand (Thee Headcoats, Thee Milkshakes, Holly Golightly, Hipbone Slim) and Paul Seacroft (THE SELECTER, played with members of Jim Jones Revue, Urban Voodoo Machine, Prince Buster), they would end up recording a whole album with Ed Deegan at the amazing Gizzard Studios for Voodoo Rhythm Records! Well, that's just what happened and this is what we got just 3 action packed days later! Recorded 99% live and analogue, here comes 13 overdriven-long-gone-broken-hearted-country-blues-trash numbers from the wrong side of the tracks. And it feels so right. "3 Cheers to Nothing" sums up the last 18 years of the San Francisco born, Berlin based Trixie Trainwreck in exile, taking you along on her personal adventures and inner struggles with the ghosts of yesterdays past, angels, demons, and everything in between. The sound is just as unexpected as the rest. We call it Trainwreck Blues!