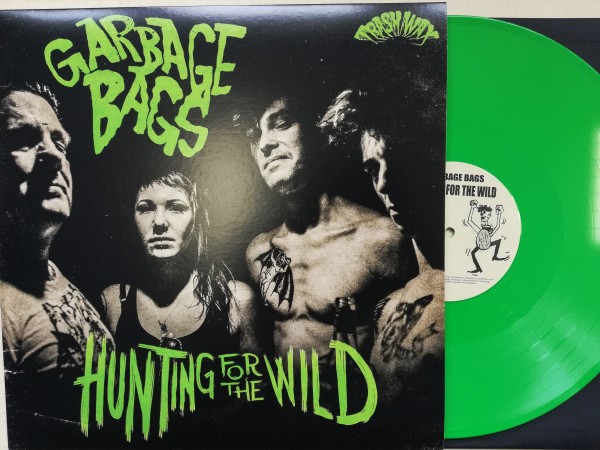 This is quite possibly one of the best releases of the year....Trashy, Rockin' Garage Punk...One part Monsters, One part Vibes, One part of early Sting Rays and lightly sprinkled with essence of DAG....I've had the luck to catch these guys & gal live a few times and they are really a force to be reckoned with, Here's what Bal of The Sting Rays had to say

ME AND THE GARBAGE BAGS

In the 1980’s just out of our teens. Me and my mates were mad music fans, Rockabilly, Garage Punk, Punk Rock. We were digging the Cramps, Panther Burns and here at home in the UK the Meteors, the Deltas. We formed a band called the Sting-Rays and over the next few years enjoyed underground success of sorts, releasing a handful of records, making a few rare TV appearances and gigging solidly. We ended up playing gigs with some of our heroes like the Legendary Stardust Cowboy and the Cramps. Through our label Big Beat Alec and I started compiling records of stuff we dug and I’d start getting crazy reverse charge calls from Hasil Adkins asking if his LP was a hit yet!

They were cool times and it was great being at the vortex of all the stuff I loved.

But things change and a few years down the line I started working in television and then film, I had married and my priorities changed and I rather dropped out of the music scene. Moving from London to Cornwall really isolated me from my old mates and it seemed I was not going to ever gig again.

Then incredibly 25 years later (now in my late 50’s) I am contacted by Darren from a label called Trash Wax and he wants to reissue my 1987 Ug and the Cavemen LP. The next thing I know he is asking us to reform and headline a gig outside Barcelona at a three day music festival, weird and weirder. All the guys from the old band agree and a few months later we are rehearsing stuff none of had played for thirty years. Also on the bill was the Wildebeests featuring Russ Wilkins, who I knew from the Milkshakes and John Gibbs who I last saw as an editor in a TV company I had worked for. There was also Ye Nuns an all girl Monks tribute show featuring my sister on keyboard, it was crazy.

And also in attendance was this group of cool young kids who couldn’t even been born when the Sting-Rays were playing, telling me what huge fans they were, and they couldn’t miss this show for anything and had all traveled from Belgium to be there. After the show they were raving about it, and they confessed they had a band and pressed a 7” single into my hands.

Back in England I got out the single and studied it Garbage Bags, Live, Smelly and Drunk it said with a picture of a four piece band slap bass, guitar, drums and singer. It was a live recording but it was good enough be a studio cut. An original Straight To Hell comes on like a pneumatic drill, wild guitar, rock steady slap bass and driving drums launch the song as Nico’s paint stripping guttural vocals proclaims “baby Im going to take you straight to Hell”. This was good, next up is a real surprise, Jonathon Richman and the Modern Lover’s Pablo Piccaso, sounding like it had been put through a meat grinder with the Cramps and the Count V. This was not just good this was very good.

So next up we are offered another gig at the Bedlam Festival in Northampton and I decide I don’t just want to do Ug stuff so this time we go out as Bal Sting-Ray and His Goo Goo Mucks, and look who is on the bill with us on the Saturday night, the Garbage Bags, cool or what? I turn up at the venue and there is this geezer with a jacket with a picture of The Sting-Rays on the back of his jacket, turns out to be Jens the Garbage Bags bassist!

Seeing them live was a revelation, Nico coming on like Teenage Lux Interior, resplendent in skin tight pvc trousers, a garbage bag waistcoat clutching a cool Sure skull microphone as he crawls around the stage howling like a banshee, their guitarist, Gilles looking like Nico’s Dr Jekyll and Mr Hyde twin brother, producing screechingly cool guitar patterns that drive their songs on, Jens’ slap bass bottom end, but with the added slap way cool and Deveney on voo doo drums, pounding a beat that drives their sound, while she looks ice cool in shades, with her red and black hair flailing around. It was outta site.

And now Trash Wax is releasing their first LP, and believe me you won’t be disappointed. They are on red hot form. Unlucky for some, 13 slabs of Garbage Bag big beat rhythm, from slow menacing growlers For the Debt, to driving psycho Exocets of Pray Day or Think of You. The Garbage Bags are happening baby, you better believe it, makes me feel like I’m a teenager again. Coming soon on Trash Wax.....makes me wonder, what hath I wrought?