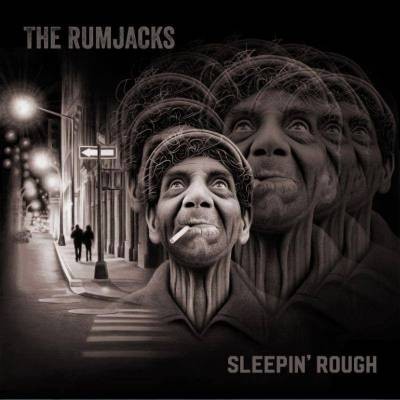 Recorded at Bomba Studios in regional Victoria, Sleepin’ Rough, the Sydney quintet’s third long-player, picks up where 2015’s Sober & Godless left off. Booming from the get-go with ‘Patron Saint Of Thieves’, a thundering punk aesthetic intertwined through the group’s Irish and Scottish musical heritage, this album is full throttle, all spit and bile, raucous and real.

But don’t make the mistake of thinking The Rumjacks are just an angry bunch of punks. Far from it – their music, while hard and fast for the most part, carries with it an element of fun and frivolity, harking back to their Old Country roots, places where music is an integral part of community gathering, soundtracking the times with an almost savage joy.

And this is Sleepin’ Rough. The melodic‘A Fistful O’ Roses’, the acoustic‘Les Darcy’, the ska-esque ‘Kathleen’, all carry a cheeky bonhomie, sometimes belying their subject matter, but always bringing a smile, a head-nod, a foot-tap. These tracks sit tidily alongside flat-out punk (the opener, ‘Dead To Me’, ‘Zielona Gora’), and the band’s now trademark mixture of the two.

As frontman Frankie McLaughlin has said, they’re not trying to reinvent anything, they’re just trying to produce the best songs they can in order to make a connection with the people listening. And that’s what Sleepin’ Rough is too – a clutch of real songs written and performed by real people, for other real people. Stories of life, love and loss, set to a throbbing beat. Sleepin’ Rough sees The Rumjacks in career best form.