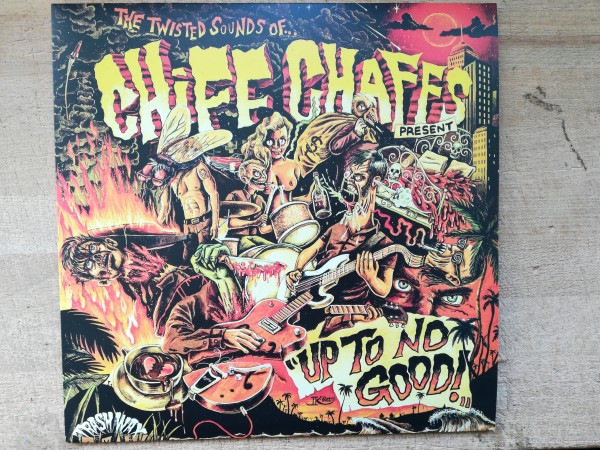 CHIFF CHAFFS - Up To No Good LP

The long awaited debut album by The Chiff Chaffs ‘Up To No Good’. It delves deep into the darker side of Garage Punk with a nod to what’s gone before however, it’s no retro styled opus. Young, brash and totally 21st century with only 1 cover version, The Mummies instro ‘The Fly’ played at breakneck speed….

After only playing a few gigs during the short breaks in the lockdown of 2 years, they’ve built up a growing following and still managed to release their first 7″ which sold out in a month (destined to become a collectors piece for sure). They’ve also made some pretty cool videos, most of which you can check out on Youtube…As well as this album, the UK based label ‘Hyperloop’ will also be releasing a 7″ in the coming months…All good stuff to look forward to !

This album was recorded over several weekends during 2021 and given the final once over tweak by ‘Doyley’ of Diablo Studios and now pressed in glorious vinyl for your listening pleasure….The killer artwork was done by ‘K-rat’ (Who is also Gilles, the guitarist of The Chiff Chaffs).

The usual references to a little Surf / Garage influence for sure but it’s a full, more mature sound where you can hear hints of early Gallon Drunk or The Vibes.

New, young and exciting. Welcome to the latest wave or to coin a phrase ‘The NBT’….