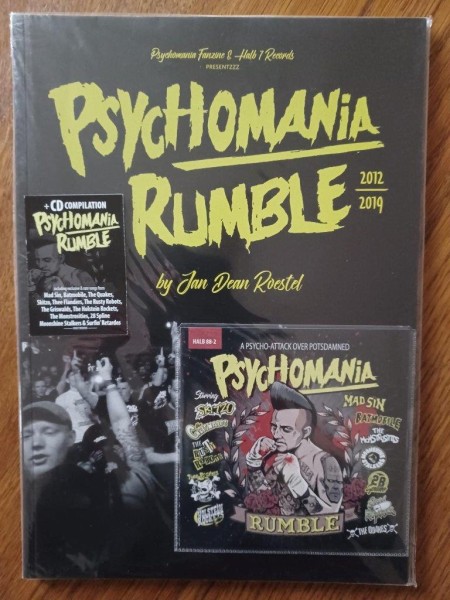 The practical square and compressed digital version with the bonus song of the QUAKES.
CD folded cover with bloody - Black cover color!

The highlight is the elaborately designed Psychomania Rumble photo book. An A4 format with practical soft cover consists of 140 pages. Hardly anyone will be forgotten here.

Jan-Dean Roestel is a passionate and scene-known photographer from Berlin.Since 2012 he has been documenting the crazy Psychomania hustle and bustle with his camera in front of, on stage and everything off stage. His Psychomania Rumble experiences were elaborately staged by Norman Winter on 140 colored pages.

Psychobilly Sampler with 12 tracks and intro

* SKITZO (UK)
Cult band from England donated the great piece "Psychomania" to the 8th Rumble. The song was released on a limited CD which was only available in advance ticket sales. As a bonus you will get a sweaty live version of the piece.

* the GRISWALDS (UK)
Again, an important Psychobilly Band of the first hour, which has the honor to set another official PSYCHOMANIA RUMBLE anthem to music. The almost 3-minute smasher was originally released on a strictly limited CD with live recording of PSYCHOMANIA RUMBLE # 5 from 2011.

* the RUSTY ROBOTS (D)
Exclusive masterpiece of the cult Psychobilly Trio from Germany. Just the right thing for lovers of the old school... Peppy, melodic sound that immediately becomes catchy. The message is clear: "the fool who wasn't at the Psychomania".

* THEE FLANDERS (D)
Psychomania and Halb-7-Recs house band created great dragging song with apt sociopathic lyrics and a psychotic minor rhythm. The Potsdamneds in best form and finally with a new song. Exclusive and sung in German only for this sampler!

* die HOLSTEIN ROCKETS (D)
Another band that released their albums on Halb-7-Rec. To honor the Psychomania Rumbles there is an exclusive track from the Kielers. The track is well played, driving and powerful. A real catchy tune that everyone can roar along live!

* MAD SIN (D)
"Potsdam...Potsdamned" is the chant of Germany's Psychobilly Troop No.1. Many scandals, sweaty performances, fireworks, a quivering stage and a twisting pit... in Potsdam the Berliners have often and violently cracked it. Köfte didn't do anything and went to the studio to record the firecracker. MAD SIN in the best way...the song is less overproduced, but dirty, snotty, fast and psycho...that's how it must be! We are proud to release this exclusive song here.

* BATMOBILE (NL)
High-calibre acts give themselves the handle. Even rarer than their performances are the releases of the Dutch Psycho-Kings from planet cheese. It's almost unbelievable that the Psychobilly Troupe is also here and gives us a song. "Rock & Roll and Alcohol" is from their last album, here in the exclusive "Psychomania" version.

* the MONSTROSITIES (AT)
A fresh band with the best Psychobilly has to offer at the moment. Sunglasses on, hair styled, instruments at hand and off you go with the Psychomania train from Austria to Potsdamned.

* the MOONSHINE STALKERS (UK)
Psycho-trio from London. A great mix of old-fashioned Psychobilly with a modern touch - wild, fast and rocking. Exclusive only on this sampler.

* the SURFIN RETARDOS (D)
Casual one-man surfing sound for a morning pint.  The Psychomania Hellbus Society invites you...
Kickin' ass...again an exclusive jewel and only to be heard here on the sampler.

* the QUAKES (USA)
USA Psychos rocks Psychomania... as CD bonus track there is this grandiose smasher of the American legend. Short, crunchy and full on the 13! ...a real Psycho-festival.