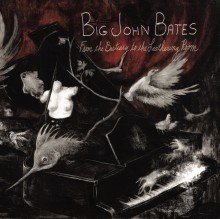 Beschreibung Produkt-Videos
Beschreibung
Big John Bates is initiating you into their Southern Gothic Death Cult; a band with an... mehr
Menü schließen
Produktinformationen "BIG JOHN BATES - From The Bestiary To The Leathering Room LP"

Big John Bates is initiating you into their Southern Gothic Death Cult; a band with an orchestral edge of ”heavy-hearted cello, weeping upright and come-hither guitars”. Every piece was painstakingly brought together from the album art created by Santiago Caruso (Pan’s Labyrinth) to the mixing David Carswell (Teagan & Sara, New Pornographers). Songwriting, vocals and the heavy lifting is all from Brandy Bones & Big John Bates. Along with upright bass Brandy contributed violin, cello and thumb piano while John broke into his collection of guitars, dobros and percussion. The recordings feature Leanne Laboucher on cello and Greg Gravy on mandolin while both JT Massacre and Brother Kris drummed for their lives! Most tracks for “Bestiary” were recorded on the Caleiuche at dock in Vancouver. The boat’s aged teak and hardwood floors were symbiotic with the wooden instruments – we advise you chase it with a dirty shot of whiskey … let it grab your fancy! 10 songs, incl. two great cover versions of 16 Horsepower und Iggy Pop.