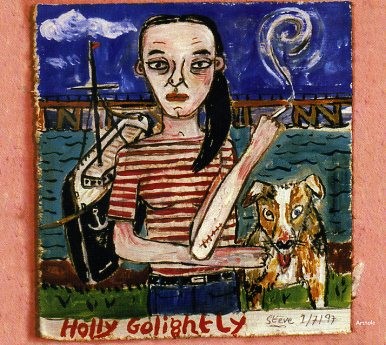 This is a reissue of Holly Golightlys third proper album which was originally released in 1997 on the Sympathy label in the USA, now finally available on digipak CD and 12 LP vinyl.

Painted On is one of Hollys favourite albums and it features some of her regular live favourites including A Length Of Pipe and I Let My Daddy Do That which she now plays along with Lawyer Dave in her current incarnation as Holly Golightly & The Brokeoffs.

This album was recorded at both Toe Rag Studios, which was then based in Hoxton and Hollys home in Rochester.

The cover features a painting by Billy Childish of Holly and her dog Jack down by her boat on the river Medway.