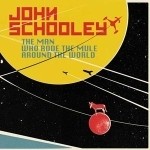 John Schooley and his powerful way of playing BLUEGRASS with his DOUBLENECK GUITAR, Banjo Harmonica and FOOT DRUM does easily replace a whole 5 piece band. He started playing guitar as a TEEN PUNK in THE REVELATORS (Crypt Records) and then in the unbeatable HARD FEELINGS (Sympathy, Gearhead, Dropkick). John Schooley toured as an additional guitar player for R.L. BURNSIDE and with the godfather of all one man bands HASIL 'THE HAZE' ADKINS. On this awesome new album (available as LP + CD) THE MAN WHO RODE THE MULE AROUND THE WORLD (2014) (2005: John Schooley, 2007: One Man Against the World) he let himself more and more be inspired by BLUEGRASS Music, GOSPEL or BLUES artists such like JIMMIE RODGERS, Blind Lemon Jefferson, DOCTOR ROSS, and Don Van Vliet, which were a main influence on his music. As additional musician he has the one and only WALTER DANIELS on board, playing a harp.