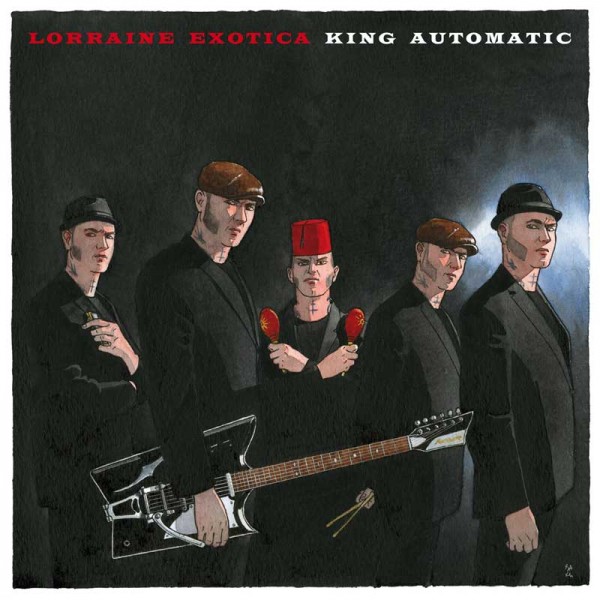 The setting : a nightclub in the tropics. The walls and seating covered in midnight blue velvetan albino tiger shark loops around a room-sized aquarium. What would you hear playing on the jukebox? Deconstructed blues, basement exotica wasteland rocksteady and Cuban sounds from outer space. Lorraine Exotica is King Automatic's 4th album - and without a doubt his most musically versatile record to date. He summons musical style from all four corners of the globe, his vocals are as self-assured as never before, his trademark live sampling and looping techniques are in place yet on Lorraine Exotica, there is a far greater diversity of flavours and shadings to be explored. Lorraine Exotica is a classic rock 'n roll record with a dash of pop sensibilities and more than just a hint of multi-ethnic influences.The end result is hypnotic, tribal and utterly danceable. Marc A. Littler (Slowboat Films)

The King goes Exotica !!! inspired from tours through the South of America and the East Of Europe the King took a big sniff of their Folk Music and mixed it up with his very own Unique AUTOMATIC SOUND , we can say the King is Todays One of thee best and Most Breathtaking (everybody who saw him live knows what im talking about) and Unique DANCE ONE MAN BANDS he mixes up French YEYE Garage Beat-Punk with Rude Boy Jamaican Rocksteady, Rhythm n Blues Exotica and Trash Rock'n'Roll.... how can you get wrong with that? Born in the East of France but the Native Roots are in the Ukraine the King use to play in such bands as THE THUNDERCRACKS the SQUARES and this is his 4th Album on Voodoo Rhythm records
On this album he tells his Ukrain Root Story in 'All crossed out in red ' or in 'La vampira del Raval' jumps into a Latino Roots 'What's your poison' is classic Automatic Garage and the Killer 'Lorraine Exotica' or 'En passant par la Lorraineis' is new Breed Rocksteady Exotica !!!