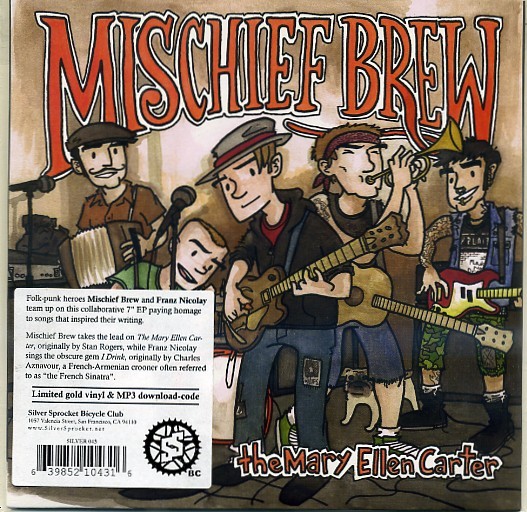 Folk-punk heroes Mischief Brew and Franz Nicolay team up on this collaborative 7” EP paying homage to songs that inspired their writing. Aside from his wonderful solo records, Franz Nicolay was a founding member with The Hold Steady and The World/Inferno Friendship Society, and touring member of Against Me!

Together with Mischief Brew’s Erik Petersen, these supremely talented and influential musicians perform stylized renditions of “The Mary Ellen Carter”, originally by Stan Rogers, and the obscure gem “I Drink” by Charles Aznavour, a French-Armenian crooner often referred to as “the French Sinatra”.

This first-pressing comes on limited edition colored vinyl in a sturdy pocket-style jacket with full color front and back cover art by Mitch Clem and Nation Of Amanda re-casting the song’s original cover art to include the featured musicians, and includes linear notes from the artists and an MP3 download code.