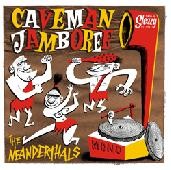 The Neanderthals are four numbskulls who claim to be real Cavemen! They dress up in leopard skin furs and play silly looking longhorn guitars to get their trashy sound. When asked to describe their "music" one dimwitted member explained "Duh,I dunno it's just rock'n'roll."

Their "music" actually is a primitive stomping rock 'n' roll reminiscent of 60's garage frat-rockers The Sonics and The Trashmen with a little Chuck Berry and Link Wray thrown in. They sing about girls in hot rods and monsters in spaceships. No poetic introspection or post modern angst here.

Rumor has it that the members include guitarist Eddie Angel (Los Straitjackets) and singer Johnny Rabb, who's usually too drunk to give coherent interviews, but is a wild showman who has been known to disrobe onstage when gotten too excited!

So there you have it. If wild guitars, stompin' beats and wildmen dressed like The Flintstones playing real rock 'n' roll rattle your primordial bones then a Neanderthal show promises to be the most fun you're likely to have this millennium.

Side B:
Foot Stompin'
Caveman Jamboree
How Can I Meet Her
Be True To Your School
Let's Go Rock & Roll