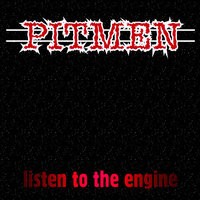 Beschreibung Produkt-Videos
Beschreibung
The Pitmens debut album out on vinyl now for the first time! Only a couple of german... mehr
Menü schließen
Produktinformationen "PITMEN - Listen To The Engine LP"

The Pitmens debut album out on vinyl now for the first time! Only a couple of german psychobilly-bands succeeded in keeping one of the top positions in the psychobilly-scene as well as coming off internationally. However, this was quite easy for Pitmen, as with “Listen to the engine” the guys released a great debut album, which got them a lot of true supporters in the scene. Indeed, this wasn´t their intention at all, as there sound significantly stood out from the other psychobilly-bands. Pitmen sounded different and i. e. added folk-elements or german lyrics to their oldschool psychobilly sound! With Christina Applegate, Just Fakes and of course Schluckerbilly this album contains three of their most popular songs, which emphasize the cult status of “Listen to the engine”. This record is a must-have for every proper psychobilly- or punk-record-collection! Limited to 500 pcs, red vinyl, supplementary sheet included.