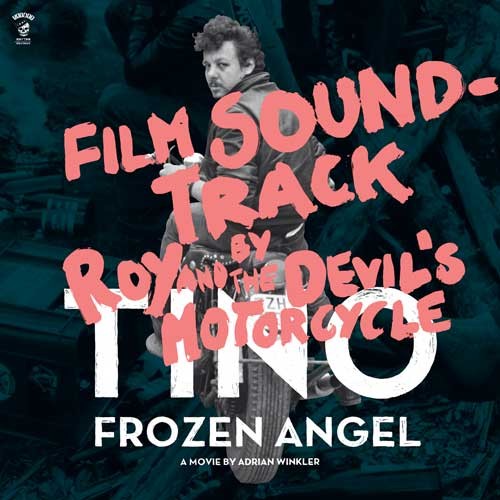 Beschreibung Produkt-Videos
Beschreibung
A MOVIE SOUNTRACK ABOUT A REBEL AND OUTLAW MADE BY SWITZERLANDS OWN OUTLAW BAND ROY AND THE... mehr
Menü schließen
Produktinformationen "ROY AND THE DEVIL'S MOTORCYCLE - Tino Frozen Angel LP+CD+DVD"

A MOVIE SOUNTRACK ABOUT A REBEL AND OUTLAW MADE BY SWITZERLANDS OWN OUTLAW BAND ROY AND THE DEVIL'S MOTORCYCLE: OLD DUSTY BLUES, BIKES, FOLK, DIRTY GARAGE AND REVOLUTIONARY PSYCHADELIA

THE MUSIC, Roy and The Devil's Motorcycle (CH)
For the past 20 years, Roy and the Devil's Motorcycle have been tenaciously and joyously doing their own thing. The 3 brothers picked up guitars and set out on a mission to set our little worlds on fire. Raw power Reverb, distortion and harmonics swirl and boil, lurch and whip in the melting pot. Initially their influences seem obvious: old, dusty blues records, gospel, dirty garage and Spacemen 3. Everything handmade and home recorded with the most obscure techniques you can imagine. So on this SOUNDTRACK of "Tino-Frozen Angel" (Adrian Winkler, 2014) A swiss biker outlaw documentray where they hit the exact right spot, whether at the famous Zürich Street Fights in 1968 or at TINO's death scene in 1981 (Tutilimundi, Bolivia) the Band composed all in the right mood , music that makes you get up and fight! The VINYL format comes in a great bundel package inclusive CD, Movie DVD and the film poster !!!!

THE MOVIE "Tino-Frozen Angel", a documentary by Adrian Winkler (director of HALBSTARK, CELTIC FROST etc)
They called him "Frozen Angel". Martin "Tino" Schippert, (1. Mai 1946; † 1981) the first Swiss President of the infamous Hells Angel motorcycle club, even during his lifetime was a legend. No one embodied the dream of the Swiss 68 Generation for freedom and self-realization as perfect like he did. But for that Dream he paid with Jail and death. the Documentray shows a Real Unique Swiss Born Bad Rebel His carrier started in the Early 60's as a rowdy and revolutinary and activist and finaly turned into the boss and founder (1970) of the Hells Angels in Zürich, Switzerland. the Documentray shows you lots of old original Film Footage from the Halbstark Erea ( Karlheinz Weinberger ) and interviews with Family, Friends, Gang Members etc Filmed in Swiss German with English / French subtitles
This Film is A swiss historical document which shows a unique man and his fights for Freedom and against the Sqarism.