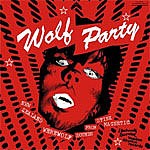 NEW ZEALAND ROCK'N'ROLL PUNK GARAGE UNDERGROUND COMPILATION WITH THE WORLDS MOST OBSCURE AND WILDEST ACTS FROM MAORI'S KIWI ISALAND PRESENTED BY STINK MAGNETIC! At the ass end of the planet lies the ancient and secretive Pacific Islands known collectively by Whiteys as NEW ZEALAND. All the way down here the cassette and film production company STINC MAGNETIC, started in 1998 by a young Maori called Dylan Thomas Herkes, better known as THE MYSTERIOUS TAPE MAN. Tape Man began documenting and recording local bands from the Wairarapa, Tararua and Manawatu areas on hand-made cassette tapes recorded one by one in real time and released them on 7 different tapes of 30 copies each. He sold them out of a cardboard box wrapped in tin foil. He describes the pact of Stink Magnetic as "documenting stuff that wouldn't have been documented ". Back than he set---up a office in a old abandoned newspaper building in Whanganui, also a record and tape store and continuously recorded many locals bands. Also ZENO TORNADO from Voodoo Rhythm Records who toured NZ back in the days . Unfortunately one day the Fire Brigade and the Cops turned up and so he moved the Company to the South Island city of Christchurch --- just in the time when it was buried in a massive Earthquake. The entire personal collection of Stink HQ was covered in a two---story pile of rubble for a fews days before most was recovered again and dusted off. Stink Magnetic won at the end and held a 13th Anniversary Festival in collaboration with the Christchurch City Art Gallery. Later that year he put out a bunch more stuff before moving to it's current location in Wellington where his now to celebrate it's 15TH YEAR OF TAPE. Through it's varied and colorful 15 years of exicsting he has release over 55 different tapes, acetates, video tapes, CDRs and vinyl 7's, LPs ! All mostly sold through live shows that tours up and down New Zealand and abroad and now finally available for a bigger World Wide Audience through Voodoo Rhythm Records.