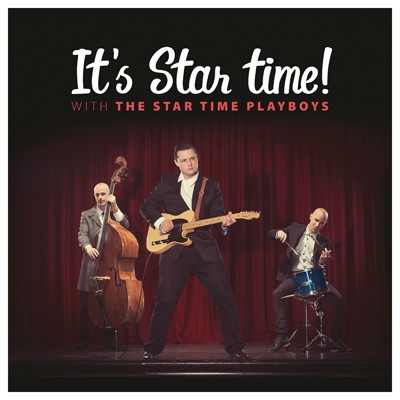 THE STAR TIME PLAYBOYS – IT'S STAR TIME!The Star Time Playboys are a new instrumental trio from Slovenia.The band is the brainchild of Urban Zotel, the young guitarist who is joined by the almighty rhythm section, twins Bostjan (double bass) and Grega Copek (drums). Their name was inspired by Urban's favourite band (Bob Wills and his Texas Playboys) which was chosen on the spot when they were booked to play their first gig.The Star Time Playboys formed at the end of 2015 and after three months of performing at local events decided to go to the studio and record some of their songs. It was the begining of the album »It's Star Time!« which features eight original songs written by Zotel. For some of them Urban had a clear idea where he wanted to take them as the melodies have been in his head for a while. The other instrumentals were created quickly during the recording process and evolved into the album that is all killer no filler! We can assure you that sooner or later you will catch yourself whistling their tunes.The first song that Urban wrote was »I'm Surfish« and its raw take was put on YouTube in February 2016. It was inspired by Dick Dale and blues legends Freddie King and Long John Hunter.»It's Star Time!« is a blend of rockabilly, surf, western swing and jump blues with the distinctive Star Time Playboys sound influenced by legendary guitarists like Jimmy Bryant, Junior Watson, Chet Atkins, Ike Turner, Jimmie Rivers and Jim Capilongo (The Little Willies).The songs were recorded live at the local studio Šmocl and mastered by the one and only Axel Praefcke, a musician and producer of Berlin's renowned studio Lightning Recorders, but who is best known as a member of the world famous bands Cherry Casino & The Gamblers, The Round Up Boys, Ike & The Capers, Spo-Dee-O-Dee and others.The Star Time Playboys made their first appearance to a wider crowd at the Austrian festival Rollin' Dudes and played with such big names as The Lonesome Drifters and Polecats. If you missed it you'll be able to hear them at two bigger local festivals, Rockin' Riviera Weekender (Slovenia, with The Booze Bombs, The Same Ol' Shoes, Dale Rocka & The Volcanoes and Vince & The Sun Boppers) and Vintage Zagreb (Croatia).»... this is a brand new band that still has lots of surprises up their sleeves« - Branko Radovančević (B And The Bops)»I listen to their cleverly arranged tunes and I am blown away at how I hear musical quotes from all my heroes.« - Tommy Harkenrider (The Memphis Kings)“ It’s hard to believe that this outfit consists of only three musicians, the full sound of this recording speaks for their unique and tasteful skills.« - Axel Praefcke (Cherry Casino & The Gamblers)