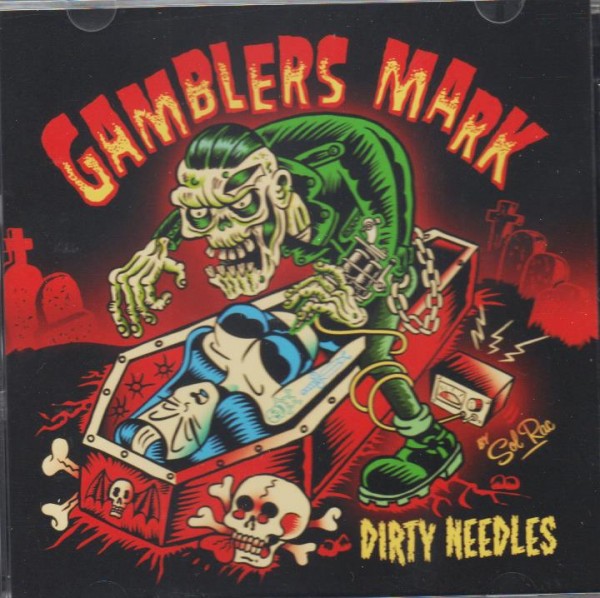 Beschreibung Produkt-Videos
Beschreibung
black vinyl! A while back Gamblers Mark posted a taster of what was to come on their then... mehr
Menü schließen
Produktinformationen "GAMBLERS MARK - Dirty Needles LP"

A while back Gamblers Mark posted a taster of what was to come on their then forthcoming album Dirty Needles. The song in question was Long Summer. It was a live-in-the-studio rendition of the song on the Loaded Bomb YouTube channel as part of their "Live at D.O'B. SOUND" series of videos. Now, I look forward to a lot of new releases, and 2017 is quite the year for new releases. But I was more than looking forward to this release. I was excited about it. This one song went straight into my ranks of all-time favourites. It also begged the question though, could the boys have more songs up their sleeves on this album that gave me such an immediate "fucking hell!" moment? Or, would the rest pale in comparison?! Well....there are "fucking hell!" moments in abundance on this album. I'm not going to single out songs and talk about them as I find that makes for boring reading. Besides, some songs have been creeping up on me and overtaking the others that gave me that initial ear-pleasure. The lads have written and produced an album that the makers of Red Bull would be proud of. It's blazing maniacal stuff but played with a skill and dexterity that brings me back to that "fucking hell!" moment every time I listen. But the lads throw in a few curve balls here and there with a couple of ska and new wave songs. I like ska and new wave. These lads can do no wrong on this album. All self-penned except for a cover of X's "We're Desperate" and what always impresses me is when a band can combine lyrics that actually have some substance to them with music that's powered by a 16 horsepower slap bass and drums backbeat and still be thought-provoking. There are a couple of songs on here that are high speed but still maintain an air of melancholia. I love melancholia me! I love this album!! If you've read the track listing above (and if you haven't then you're a half-arsed reader) you'll notice some guests in the song titles. The guests in question are The Flashbax and Jackie Mendez...The Flashbax are an offshoot of Gamblers Mark and a melting pot of different musical stylings and Jackie Mendez is on vocals in the aforementioned Flashbax. See? Not only are my reviews....reviews....but they're educational as well. Now then, as I alluded to earlier, 2017 is quite the year for new releases, I've been looking forward to a lot of em. One or two were utter disappointments so won't be gracing these pages, but this one, this one is head and shoulders above a lot of the stuff released so far this year and has surpassed stuff I've had in my ledger-o-favourites for the past 30 years.
THE O'PREZ