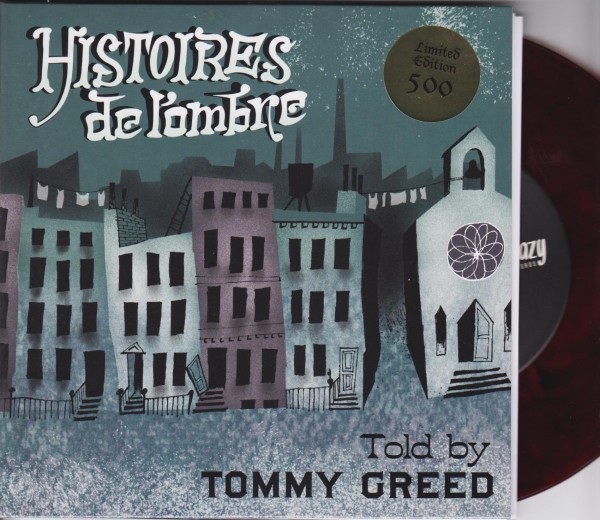 Unique nugget brought to life by Tommy Greed, the famous Ray Collin's Hot-Club druming man!
Lovely GATEFOLD cover, made by the one and only Marcel Bontempi!
Musicians beside Mr. Greed are Koefte Deville (Mad Sin), Thomas Slowborn (Louderdales), Jenny Don't! and many others!

But also read the record release notes below:

ever wondered what ray collins' hot club, mad sin and jenny don`'t and the spurs
could have in common?.. no??!   haha, well.. not that much indeed but now at least
a little piece of vinyl that i‘d like to write a few lines  about.
As a founding member and the man behind the drums of the ray collins' hot club,
tommy is known to a large amount of people in the rock 'n' roll scene for many years now.
his work with this 40s to 60s r'n'b and swing music related band
though never kept him from every now and then writing songs by himself, considering his own
musical roots wich is basically more 60s to 80s all kinds of underground and mainstream stuff...
the "histories de l'ombre" 7" is a tiny collection of songs
related by their dark atmosphere, settled in victorian england.
for "emily",  a ballad inspired by tim burtons corpse bride ,
tommy could manage to get mad sin leader  koefte deville  doing the vocalpart.
the result of his performance is outstanding!
deville here perfectly matches  the part of the undead protagonist  desperately in love with the bride.
"when i fall asleep" was originally written for the louderdales, another band tommy plays with.
the fantastic string arrangement  was written and played by cello virtuoso david floer ;
completed with the fine vocal works of jenny conners (jenny don't).
the uptempo crime theme "inspector lestrade" was a song tommy found coincidentally,
as aachen based guitarist and composer oliver schmitt put
it on soundcloud as kind of a rough diamond with no title and not fully worked out.
tommy's been immediately in love with it,and completed the production with schmitt's permission.
last but not least,
the cover artwork has been created by the phenomenal marcel bontempi who did an amazing job
letting the songs become visual!!
so, this little piece of vinyl is a visually and acoustically beautiful shadowplay
and absolutely one of my favourite releases this year...
"histoires de 'l ombre" is released through  sleazy records spain.