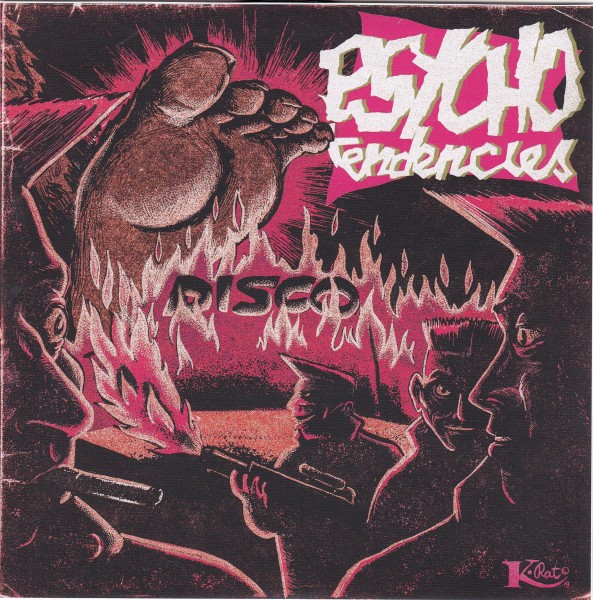 The spain Kick-Ass-Psychobilly Outfit PSYCHO TENDENCIES are rockin' the streets
of Barcelona since their first boot-steps back in 2012.
Even though their live-gigs have been as rare as intense, they made themselves a
name in the international Psychobilly-Scene.
Back in 2017 the selftitled debut album was released on CD in Japan on the well
known record label RUDE RUNNER RECORDS (RRR 028) which included 12 Songs that
actually were meant to be PSYCHO TENDENCIES' first demo recordings.
Followed by the fantastic sounding self released 10 track Live-Tape
"Live At Meteoro" (2019) which proves the unbelieveable wild power of a
PSYCHO TENDENCIES show (including a complete insane frontman who knocks his
head with the microphone till the blood runs all over his face).
But even when this great live-recording achieves the quality of the legendary
"Stomping At Klub Foot"-Compilations, sadly it was only released on Tape
(strictly limited to 50 copies only), similar to the 2017 debut album that was
released only on CD, and was only available in Japan.

GET STOMPED RECORDS is proud as hell to put out this EP as limited 7"-Vinyl with
four brand new killer-tracks which represent the PSYCHO TENDENCIES in best
shape, sound and finally on vinyl (for the first time EVER).
Recorded at the band's very own BONZO RECORDINGS, this EP was produced the way
PSYCHO TENDENCIES should sound like: powerful, pissed off and sharp as a
razorblade!
The front cover was drawn by none less than Gilles Deschamps, better known as
KING RAT, responsible for countless fantastic Psychobilly-Artworks of the last
ten years.

Call it "Kick-Ass-Psychobilly" or maybe the most aggressive Rockabilly ever
played on earth..
Always remember: Whenever you see a PSYCHO TENDENCIES show, you can be sure that
THE DISCOS ARE ON FIRE!!!

Tracks: Bigfoot Stomp / Friday Night / Discos Are On Fire / Alone In The Moon