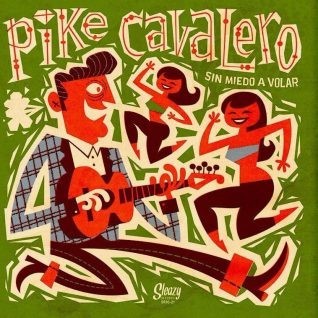 Beschreibung
Beschreibung
5 years after the release of his first album with The Gentle Bandoleros, ‘Just a Matter of... mehr
Menü schließen
Produktinformationen "PIKE CAVALERO - Sin Miedo A Volar CD"

5 years after the release of his first album with The Gentle Bandoleros, ‘Just a Matter of Manners’ (2o11) and after stablishing himself as a solo act with ‘Torro’, (2014), Pike Cavalero, is near a crucial moment in his career, ready to present his first job in Spanish.
After years of touring across Europe in great part of the clubs and festivals of the rockin’ and roots music scene, Pike faces a new release, in a clear personal bet where he mixes his defined vintage sounds with spanish lyrics. ‘Sin Miedo a Volar’ (2016) will be released through Sleazy Records (Málaga), one of the world leading independents in the genre, containing 12 new tracks (10 original with two Spanish adaptations penned by Pike) where we will enjoy, from blues and country traces to high energy rock’n’roll or wild rockabilly in a different and exotic way and without losing an ounce of freshness.