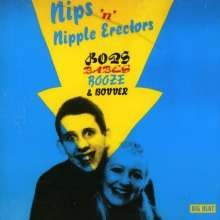 The inimitable Shane McGowan's debut recordings made for Soho Records when he was a punk rockabilly. Also featuring future Men They Couldn't Hang bassist Shanne Bradley.

You get 20-odd minutes of uproarious music that has stood the test of time rather better than has a lot of 1978's 'new wave' outpourings - including at least two undisputed genre classics in the anthemic (Gab-gab-gab) Gabrielle and the wild garage riffola of All The Time In The World. And, most of all, you get the musical answer to Mr MacGowan's time-honoured question that's been baffling music historians for a quarter of a century, "Why do - theycallmethekingofthabop?"

No need to bother with the answers on a postcard. They're all here. Still want bovver? Then you're in the right place for it. Come and have a go if you think you're hard enough...