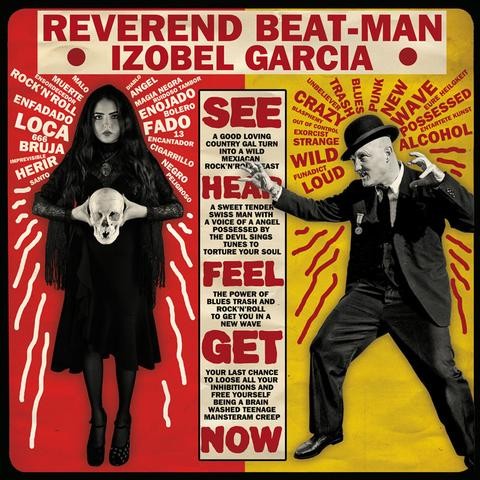 They first met up in Los Angeles at a show. He asked if she could play the organ and drums. She said yes, and the bond between them was made. A couple days later they played their first show at Alex's Bar in Long Beach. Now you hold in your hands, for the first time ever, the fruits of their labor.  Some of the songs are originals and others are covers.  Macorina is a song by Chavela Vargas a Mexican icon in traditional folk noir music.  She was a strong fighter for women's rights in Mexico and across the globe. Black Metal is by Venom, Beat-Man's favorite band, they created their own music style and inspired millions of kids to be different and they created their very own music style,  Black Metal. LOVE ME TWO TIMES was written by The Doors from Los Angeles (Venice Beach) and is played as a scary mellow graveyard rocker version.  All of this was  recorded either in Italy, Switzerland, or Los Angeles .. have fun with BAILE (dance) BRUJA (witch) MUERTO (death) this Album is Full of Garage and Weird Rock'n'Roll and Cumbia