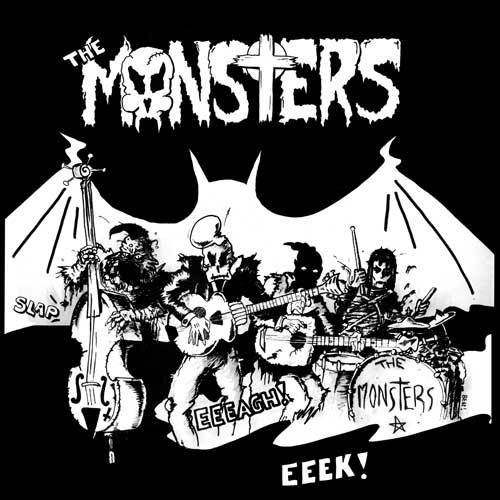 The Monsters where formed in Bern Switzerland back in 1986 , they recorded 'MASKS' as their 1st Album in 1989, a year after they released a EP called 'nightmares'. After many shows in Switzerland they decided to go to Luzern in the Schweinesound studios to record a Full Lenght and spend 3 Days recording it and was 1st LP Released on Bernese Record Label and Shop 'recORD junkie records' in a edition of 666 records, they where sold out pretty fast and never reprinted again, record junkie stoped releaseing records after a couple years of existence , Beat-Man was working at record Junkie in the Shop so when it collapsed he formed Voodoo Rhythm records and  after 24 jears of silence and hours in the Cellar digging trou original 2" Master Tapes and transform it into 2013 sound format that Trash Billy Desaster Is Available and Reborn Again, the Lyrics are as Stupid as its get and on the Instruments they Have a Standard of some retarded Cavemen, and i think that makes that Album interesting, teenagers with the Attitude to Go in A Studio and no Borders just the Love of Rockabilly And Garage Punk  and that Album was Born, PURE TEENAGE TRASH A BILLY !!!