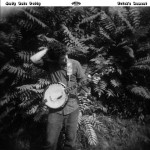 Born in NORTHERN GEORGIA sometime between 1985 and 1986, raised by a single mother and a clan of cousins, his first instrument was Harmonica, then Ukelele then he got addicted to the GUITAR and the BANJO, BUSKING in every street corner in the tiniest towns of south central Tennenesee and then went on travel and I mean travel! and that's what he's doing best: travelling by train or by foot and writing songs about it and about live in general. He toured Europe several times and America up and down, mostly only him with his guitar, no guitar amp - that's to heavy to carry - just THE MAN AND HIS GUITAR, sometimes backed up by a drummer or other musician. For the album 'FRICK'S LAMENT' (Voodoo Rhythm Records LP/CD) he went to Italy's famous OUTSIDE INSIDE STUDIOS with Matt Brodin to record a 12 song mindblower, the opener 'Fricks Lament ' is about a dream Andy had, 'train on the island' is a Fast TRADITIONAL BANJO TUNE. All Songs on the album are accoustic, some with additional drums or a second guitar. 'FRICK'S LAMENT' is Andy's 2nd Album on Voodoo Rhythm ( 2008 --- all god's children have shoes). ANDY DALE PETTY is a MODERN FOLK SINGER, a troubadour, AMERICANA BLUE GRASS and multitalented songwriter in the tradition of BERT JANSCH, MISSISSIPPI JOHN HURT and WOODY GUTHRIE.