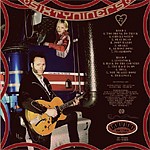 Althought originally from Amsterdam and Groningen, but they sound like a wild and pure mix of raw Americana and Stompin'Hillbilly straight from a BBQ of a North Carolina Trailerpark Claudia Hek, well known worldwide of her beautiful artwork for flyers and posters plays the drums.

On guitar and vocals her man Michiel Hoving. As well a respected and nominated flas animator story teller, Ugly Mean Chickie, Deadrat or Hotduck, just to mention a few of Hovings popular cartoon characters, have been seen by more than 100.000 peole worldwide. A more than just creative pair which transformed themselves on  Too drunk to truck from a 2 piece raw straight trucker outfit into a White Trash Country Orchestra with many musician friends, such as Mama Rosin, Urban Dance Squad, the Bluesgrass Boogiemen and the Anomalys. The 14 songs were recorded in a farmhouse in middle of nowhere in Groningen and of course mixed in the amazing Outside Inside Studios in Venice Italy. Most of the songs are written by Hoving except some covers from Ledbellys.