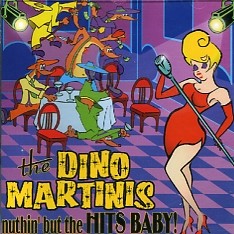 Beschreibung Produkt-Videos
Beschreibung
THE DINO MARTINIS are a 6 member band from Calgary/Canada which mix the ultimate cocktail out of... mehr
Menü schließen
Produktinformationen "DINO MARTINIS - Nuthin But The Hits Baby! CD"

THE DINO MARTINIS are a 6 member band from Calgary/Canada which mix the ultimate cocktail out of swing, Jump Blues, Lounge and 60ties Popt. The band combines Old Time Swing feeling with the energy of today and so will get into your brain. Look out for the great voice of female singer Nicole Brennan, sometimes happy and sometimes very sexy! In canada they are really big and had several parts in american and canadian sitcoms. They also made one song for the soundtrack of John Woo's "Once a thief" and the series of "Highlander". Each Swing fan gotta have this!