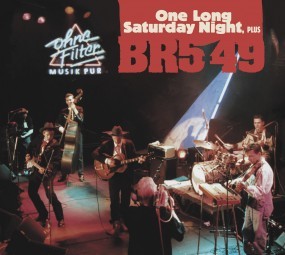 When the Opry moved to the suburbs in 1974, Nashville’s Lower Broadway (commonly known as Lower Broad) began to succumb to the forces of urban decay. But then, in a July 1995 'Billboard' cover story, Chet Flippo wrote about a "new scene" that had "developed on its own in Music City." Encouraged by the 1994 opening of the remodeled Ryman Auditorium, progressive, tradition-based country artists like BR549 moved into the honky-tonks of Lower Broad to create a vibrant scene that attracted kids as much as old timers, and eventually inspired the downtown renaissance that continues today. The year following that 'Billboard' story, BR5 49 were in Germany and were filmed and taped at Südwestfunk.