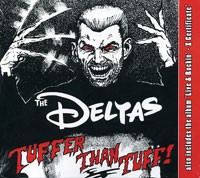 Third Studio album from The Deltas, plus the whole of the 'Live & Rockin' - X Certificate' album added as bonus tracks.The Rockabilly Revival of the early 1980s spawned a string of chart hits for the more commercial bands of the genre - but while the hitmakers played Top Of The Pops toured the major venues, the dark, sweaty underground clubs became home to an infestation of wilder Rockabilly lowlife of which the mainstream remained unaware, and which later mutated into the Psychobilly scene which thrived thoughout the 1980s.One of the craziest of these Rockabilly bands was The Deltas. By the time their third album 'Tuffer Than Tuff' hit the racks, the original three-piece line-up had been joined by ex-Polecats Boz Boorer and John Buck.The Deltas still play today (when Boz isn't busy touring with Morrissey) and as their back-catalogue has been out of print for some time, this re-issue (also including 'Live & Rockin' album as bonus tracks) will be welcomed by their followers and Rockabilly fans and collectors in general. TRACKLIST: Where'd You Stay Last Nite? / Comeback Baby / Teenage Ball / Tuffer Than Tuff / Crazy News / Ice Cold Baby / Had My Fun / Cool Off Baby / It Ain't Right / 'Erd The Gossip? / John I'm Only Dancing / Nine Below Zero / Shake Your Money Maker / Early In The Morning / Gimmy The Drugs / Mad For It / London Girls / Pie 'n' Mash / 'Erd The Gossip / How Come You Do Me / Where'd You Stay Last Nite? / This Train Is Bound For Glory / Whip It Up.