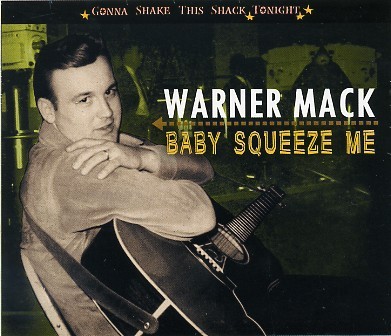 1-CD Digipac with 44-page booklet, 38 tracks. Playing time approx. 84 minutes. -- In this CD you'll find a massive 38 tracks recorded by this important artist during the classic era when rock 'n' roll met the Nashville Sound! Here are all 12 tracks from Warner Mack's six Decca singles issued during 1957 and 1958; 16 tracks not originally issued by Decca; and four tracks from singles issued on Scarlet and Top Rank in 1959 and 1960! Also here are Mack's two very first rockabilly recordings made at Delta Records of Jackson, Mississippi in 1957! Bonus tracks include three radio advertising spots Warner made for the Mary Carter paint company - and finally, a live radio recording from 1958 of 'Honky Tonk Song'! His Decca disc, 'Roc-A-Chicka', was a no.74 pop hit in January 1958. The accompanying booklet by Martin Hawkins tells the little-known story of Warner Mack and contains rare photographs! -- Warner Mack wrote and recorded two classic songs of the rock & roll era - 'Is It Wrong (For Loving You)', and 'Roc-A-Chicka'. But he was responsible for many more country and pop hits, both as a singer and a songwriter. His prolific Decca output of the 1950s has not been recognized for the significant and influential body of work it is - until now! -- Warner Mack was one of the best singers and songwriters of the '50s and '60s; a man who started out with rockabilly but soon demonstrated a real command of many other rock 'n' roll and rockaballad styles. His was a commanding yet at times plaintive, appealing voice and his songs displayed his rare ability to capture the essence of life and its successes or trials in a song. He had a number of country pop hits in the '60s including 'Sittin' In An All Night Caf‚' in 1964 and 'The Bridge Washed Out' in 1965 and many more country hits right through to the later 1970s. As a writer he was prolific and was still writing hits for Ricky Van Shelton in the '90s. He owned recording and publishing businesses, Pageboy and Bridgewood, and put his name on Warner Mack's Country Store out of Madison, Tennessee. Through ill-health Warner Mack withdrew from the music scene some years ago and his part in creating Nashville's sound is little-remembered today. Now it is told the Bear Family way in words, pictures, and especially in his music.