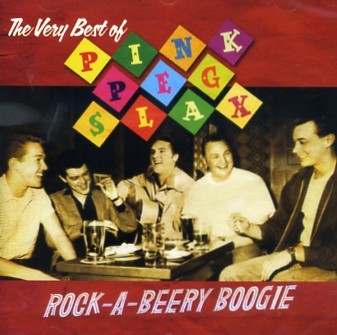 "If Elvis had been a Marx Brother, he would have invented Pink Peg Slax" (James Brown, NME) "Plangent, Cajun-tinged Jiveabilly" (John Peel) With a name derived from an obscure Eddie Cochran rocker, Pink Peg Slax promise rockabilly revivalism, but these veterans of the Leeds 80s music scene want you to feel the power of rock but grin while you're at it. Borne out of punk and inspired by Glam, the Slax line-up were original members of the Mekons, the Sisters of Mercy and The Gang of Four. Celebrated by John Peel and Andy Kershaw (4 Radio 1 sessions), the NME (3 singles and 2 albums gained 5-star reviews) and TV chef Keith Floyd (who wrote sleeve notes) Pink Peg Slax knocked out 100% original tunes with a deft rockabilly-cajun approach. Pink Peg Slax provided the necessary knowing wink to counter the gothic scowl on the face of indie music in the mid-80s. The Smiths released Meat Is Murder; the Slax released Eat More Meat. The only band ever to offer James Cagney impressions as serious musical output on night-time Radio One, Pink Peg Slax busked their way onto C4's The Tube, annoyed legions of Goths by supporting The Mission on tour and wrote songs about drunken pigs, deaf railwaymen, murderous Frenchmen and Holsten Pils. Frontman Vince Berkeley once thanked an audience of fairground workers for not being "gippos", told an indifferent audience in Dusseldorf to "go away and make some chemicals" and if spat on by the audience, would spit back. And yet the band's Roman Catholicism led to album reviews in The Universe, the premier UK religious weekly.And now Pink Peg Slax have re-grouped, discovered Facebook and some of them have retained their hair.