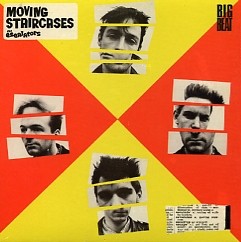 The ESCALATORS rose from the ashes of perennial psychobilly heroes the Meteors, and were ex-band members Nigel Lewis and Mark Robertsons stepping stone to their next acclaimed band, the Tall Boys. One album and a couple of 45s represents their contribution to the history of rocknroll and were delighted to put at least the long playing portion of their catalogue back in circulation, if only to reduce the number of calls and letter we receive from Meteors obsessives whose every wish it seems to be to have MOVING STAIRCASES on CD a mere 23 years after its vinyl debut. TRACKS: 01 THE DAY THE SUN BURNED DOWN 02 SLOANE RANGERS 03 VIDEO CLUB 04 FLANDERS FIELD 05 YOUNG MEN 06 CUT UP 07 ESKIMO ROCK 08 SLUMBERLAND 09 DOG EAT ROBOT 10 THE CAMDEN CRAWL 11 SURVIVALISTS 12 STARSTRUCK 13 MONDAY